The Risks Of Construction for Owners I’ve been involved in the construction industry for almost my whole career.

While the business has many positive aspects, I’ve noticed a disturbing and recurring theme: owners inevitably get screwed.

They get taken advantage of by anyone and everyone; General Contractors, Construction Managers (CMs), subcontractors and lawyers – all out to protect their own interests.

Owners routinely get the short end of the stick. Every project is a risk. The Decline Of The Industry

We don’t enjoy the same construction methods we had in the early 1900s.

Back then, the Empire State Building was completed in a record-breaking 13 months, and its contractors finished ahead of schedule and under budget.

They utilized a genius assembly line method with about 3,400 men working daily, building four and a half stories per week.

Can you imagine this happening nowadays? It would probably take 10 years to build.

Their efficiency was notable and admirable, and that was almost 90 years ago.

Contrast this to one simple example in today’s industry: a contractor bid $1 million to construct a fountain, but the final cost was $2.5 million – a 250% increase from the initial cost – for the same fountain.

This is one of thousands of horror stories. How is this possible?

Contractors Are “The Experts”

Most owners don’t have (and shouldn’t have to have) expertise in the construction realm.

Because of this, unscrupulous contractors know the owner’s not in a position to argue when changes arise.

They also know how to play the bidding game. Low bids are understandably enticing.

Yet, if the owner accepts this, he or she will be hit with a mountain of “unexpected” charges, costly delays, and dangerously cut corners.

The moment a project is underway, the leverage shifts to the contractor. And many contractors will use this to take you for all you’re worth.

And even if you get hit with massive sums you have to pay, the least detrimental option is often to cut losses and pay up.

There is little recourse, and you’re on a leash the whole time.

Have you ever passed a construction site day by day and wondered why it took so long to see any progress? Is that really just “how it is”?

No. Contractors and CMs could complete projects much more quickly and efficiently, but they have little reason to do so.

Because while greater efficiency would result in a happier client, it would also mean less money in the contractor’s pocket.

It’s in their best interest to stretch the project out as long as possible.

To add to this, the construction industry is traditionally “feast or famine.”

When it’s busy, contractors can charge more because that’s what the market will bear. And then they don’t have the time or incentive to invest in new methods and technologies.

When things are slower, contractors and CMs don’t have the money to invest in technology to create greater efficiencies, and because they don’t, their productivity never improves.

There is no incentive or ability to improve productivity, and you’re paying for it.

Altering the rules of the Game

I had resigned myself to the sad reality that’s plagued owners for at least the last 50 years: an industry rife with problems too monumental and intertwined with greedy motives to change.

But then I began observing patterns, and saw reasons why these problems occur. I discovered that the delays, headaches, incompetence and deceit aren’t random or unpredictable.

On the contrary, they’re a core part of a broken system – they happen, not despite the construction process, but because of it.

Everytime an owner signs up for a typical, lowest bid project, he or she is risking their bank account, reputation, and mental well-being.

And this is nothing short of complete injustice.

I had to do something about it. There had to be a way to restore power back to the owners.

That was when I developed the Risk Free Construction Solution™, an accountability system for construction projects.

It oversees the process, controlling each step from start to finish, ensures quality, and protects you from budget overruns, schedules gone awry.

In short, it gives you back control over your project.

Download this free book to learn more. [Link to book] 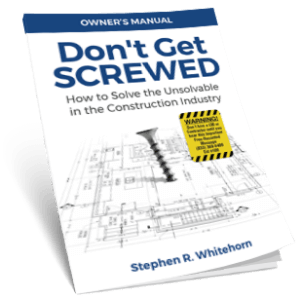